Cohorts were the building blocks of the SPQR

Cohorts were made up of about 480 Legionaries, divided into six Centuries.  Each Century consisted of 80 men and a leadership team.  The 80-man Century was led by a Centurion (Company Commander), seconded by an Optio (XO) and with a Tesserarius Watch Officer (1st Sergeant) and a Signifier (Standard Bearer), plus a Cornicen (Bugler).  10 Cohorts formed a Roman Legion army; roughly 5,500 men total.  Each Legion, in addition to the core heavy infantry included associated siege equipment (~60 men operating primarily ballistas), a small medical team and the cavalry (called Equites--drawn from Rome's upper-class: ~120 men mainly for scouting & dispatches). 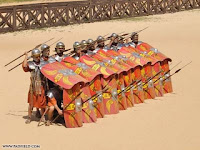 The Cohort was commanded by a Tribune (Battalion Commander) who could be a military experienced leader, but often the Tribune position was purely a political appointee from the Senate or Emperor (i.e. a younger "elite" male who was on his way to being a Senator).  Due to this factor, the senior Centurion (the 1st Century of each Cohort) would run the day-to-day operations of the Cohort.  The first Cohort of each Legion would be double in strength; roughly 800 men (consisting of five double-strength centuries).  This extra-large Cohort would hold the position of honor and be the key pivot/anchor formation on the Legion's right wing.  A Tribune, if he was smart, would rely heavily on their Centurion of the 1st Century of his Cohort for battle and training advice; these most senior Centurion of the larger 1st Century of the 1st Cohort would be called First Spears (Battalion XO) and as they "aged out" of direct combat duties would be promoted to Camp Perfect (Command Sergeants Major).  The Perfect would be in charge of Cohort  camps and Legion garrisons (especially important during the long winter encampments when Legions would do mainly nearby civil engineering tasks, e.g. cobblestone road construction called Via's and refit/train).  The Legion was commanded by a Legate (Brigade Commander).  The Legate was normally a purely political or wealth-based consideration, although rarely a seasoned, battle-tested military officer would be promoted up to Legate.  The Legate's staff would include up to 6 Tribunes and many scribes/clerks; the Tribunes would rotate duties with the primary one being Cohort command.  The most senior Tribune would serve as the Legate's second in command (Brigade XO).  Roman armies made up of several Legions would be commanded by Generals (Division and Corps Commander).  Fast Recap: 5/6 Centuries = 1 Cohort, 10 Cohorts = 1 Legion, multiple Legions = Roman field army.  Every Roman field army would also have attached to it numerous units of auxiliary troops from around the empire (e.g. archers, cavalry and infantry cohorts). 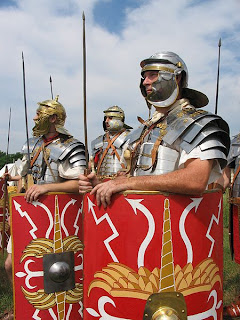 Back to the Century: each Century had 8 squads (aka "Tent Groups") of 10 men; led by a Tent Sergeant (Squad Leader) who was literally in charge of the large tent the squad would all share during the campaigning seasons.  He'd also work with the Watch Officer or Tesserarius, to ensure guard duty rotations were followed and challenge/passwords were set.  Each squad would also have their assigned section of the fortified marching camp to build each night.  The Century's Signifier (Staff Sergeant) would be charged with keeping the unit's finances and burial fund straight.  The Century's Cornicen (Corperal) would sound and relay the commands of the Centurion and had a slightly higher pay than the average soldier.  Starting around 85 BC, each Legionary would now carry his own complete kit (cooking pot, canteen, etc.) on a yoke (thanks to Marius--hence the nickname Marius' Mules), but the large tent would follow the Legion's marching formations on a cart in the baggage train.

This Cohort-based design was implemented by Gaius Marius following a devastating military defeat for the young Roman Republic at the hands of several Gaul tribes (two Roman armies with 10-12 legions + 40k auxiliaries were totally destroyed circa October, 105 BC; at The Battle of Arausio).  Marius was on the verge of becoming a very popular Roman general (he would go on to be Consul of Rome many times) and he quickly realized the Roman army needed a major overhaul immediately (especially with the goal of conquering North Africa).

This major overhaul included every aspect of the Roman army; such as its size (to larger, more self-contained units), recruiting methods (switching to a highly disciplined, volunteer professional army with a 20-year retirement system), better equipment (e.g. from spears to throwing javelins and from heavy leather tunics to segmented chest armor), improved tactics & formations (i.e. transitioned from the hoplite/phalanx and manipular/3 offset lines formations, to a Cohort-based system).  These numerous and sweeping changes, named in history as the "Marius' Reforms", would help the Roman army become the world's greatest military power for the next 400+ years and be an outstanding source of historical legend and myth. 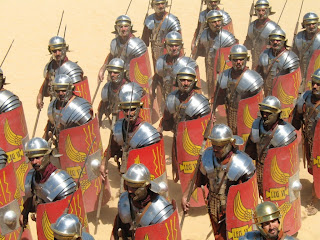 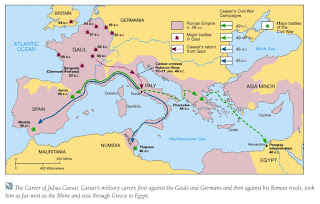 Rome's improved Marius' Reforms (enhanced even further by arguably Rome's greatest leader--Emperor Augustus, 1st Century AD) were so good in fact, that most of today's professional military forces around the world still use the building block unit system he created as well as the many military traditions and rules/regulations set forth by Roman Armies.  Lastly, we have so much knowledge of Rome's ancient military and its history today because embedded in their ethos was a focus on recording everything--especially Julius Caesar himself.  Interestingly enough, Julius Caesar was set-up to be so successful largely due to Marius' military genius 50 years earlier and once combined with Caesar's amazing military engineering prowess, he was virtually unstoppable.  Rome's military in fact conquered so much of the civilized world it's truly amazing and their place in history was cemented for eternity. 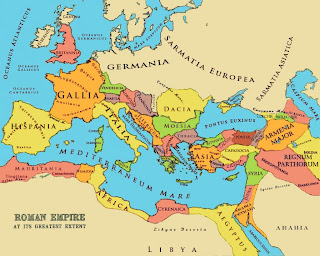 Pax Romana or Pax Augustus
The Roman Empire would reach its Ancient World zenith under the 13th Emperor, Trajan.  He conquered most of the upper part of the middle east (by defeating the Parthian Empire) and brought it into the empire (circa 117 AD).  He was succeeded by his adopted son, Hadrian (famous for the wall across Rome's Briton territory).  Much later (post 450-500 AD) Rome on succumb to many problems, primarily pressure from various barbarian tribes and internal strife, and split into western and eastern empires.  Eventually these too would fall and morph into other kingdoms/military factions, but the Roman Empire's amazing legacy lives on. 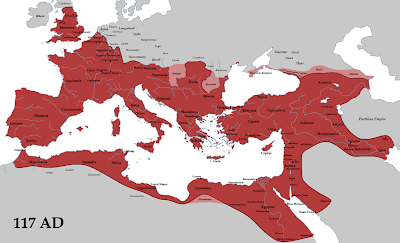 A Roman Legion was an infantry unit consisting of heavily armed soldiers, equipped with shields, armor, helmets, spears and swords. In the early republic (circa 170 BC), the strength of a Legion was about 3,000 men; there were 4,800 Legionaries in a Legion in the days of Julius Caesar; the 28 Legions (about 185,000 soldiers) that defended the Roman Empire during the reign of Augustus counted more than 5,400 soldiers each (circa 10 AD). They were the backbone of the Roman army, supported by auxiliary troops, siege equipment and cavalry. Although in the third century, large cavalry units gradually superseded the Legions as Rome's most important force, many of the foot Legions remained well into the fourth and early fifth centuries.

The Glory of Rome